﻿﻿
Mountaineers from all around the world presented their folklore at the 45th International Festival of Mountain Folklore in Zakopane, Poland.  President Bronisław Komorowski and First Lady Anna presided over the festival, and took part in several events.

The main trophy – the Złota Ciupaga (Golden Mountain Axe) was bestowed to several ensembles in various categories.  Among them was the Highlander Ensemble – Harnasie from Toronto, Canada under the direction of Ted Zdybal and Barbara Bejger.  The special award was presented by President Komorowski in recognition of the cultivation of native culture in North America. The group also received from the Judges an honorary award for singing and a Parzenica Award – the Highlander symbol of Pride for their artistic program in the “Artistically Elaborated Presentation of Highlander Folk” category.


Promoting highland history and culture, the Festival dates back to 1968.  Known both in Poland and around the world, its main objective is to present not only the native folklore, but also traditions and culture from around the world.
Posted by Polish American Journal Today at 5:04 AM 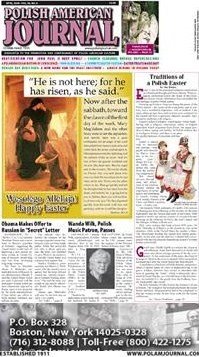